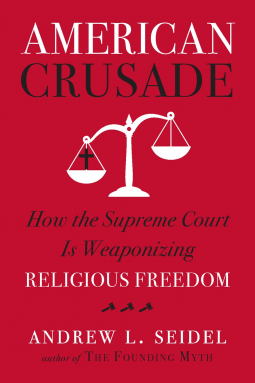 How the Supreme Court Is Weaponizing Religious Freedom

Is a fight against equality and for privilege a fight for religious supremacy? A constitutional attorney dives into the debate on religious liberty, the modern attempt to weaponize religious freedom, and the Supreme Court's role in that “crusade.”
Critically acclaimed author and constitutional attorney Andrew L. Seidel looks at some of the key Supreme Court cases of the last thirty years—including Masterpiece Cakeshop v. Colorado Civil Rights Commission (a bakery can deny making a wedding cake for a gay couple), Trump v. Hawaii (the anti-Muslim travel ban case), American Legion v. American Humanist Association (related to a group maintaining a 40-foot Christian cross on government-owned land), and Tandon v. Newsom (a Santa Clara Bible group exempted from Covid health restrictions)—and how a hallowed legal protection, freedom of religion, has been turned into a tool to advance privilege and impose religion on others. The book will include a foreword by noted constitutional scholar Erwin Chemerinsky.